The genera for which this guide was prepared are those such as rhizomatous Achimenes, Seemannia, Eucodonia, as well as many of the tuberous Begonias, such as B. taliensis, B. henryi, B. sutherlandii, etc. 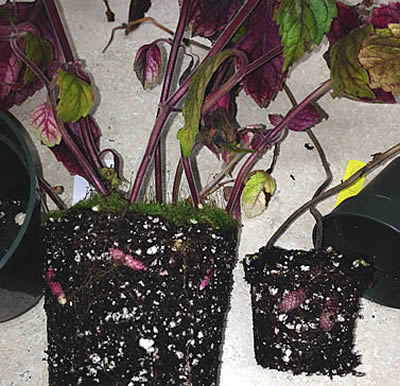 When the time is right

Unbelievably beautiful when growing and flowering, but for these seasonal growers there will come a time (typically fall to early winter) when their outward appearance will noticeably decline. Foliage will look tired, start to yellow and shrivel and eventually the stems will die back.

This is not a time to mourn for they are not lost. It is, however, a time to consciously cut back on watering. Do not immediately halt watering as you need need to let them go dormant at their own pace. It is in this time that they are actively transferring energy back down and into their resting rhizomes & tubers. If you prefer, one can even carefully and occasionally lift the root ball from a pot or two to help you determine their underground progress. 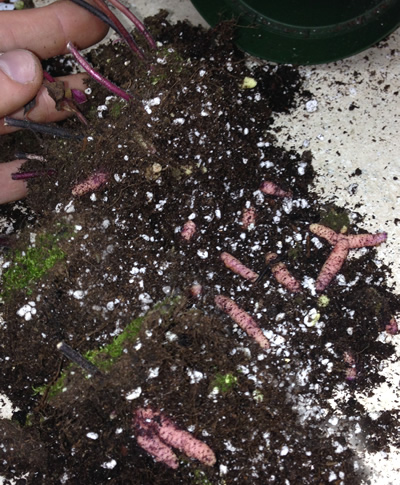 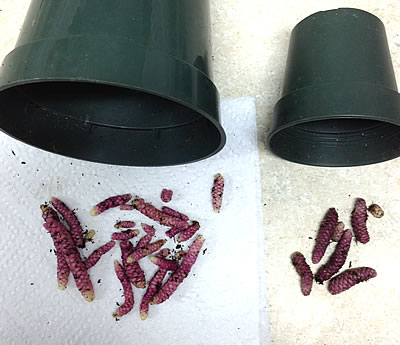 To Clean Or Not To Clean

Once they have more or less completed growth (tops have died back, rhizomes more or less fully formed), your next step is somewhat a matter of personal choice. Some growers simply cut off and discard the above-ground remnants, storing the totally dried-off pots (medium and all) intact for the winter.

Other growers, like myself, prefer to totally unpot and "clean" the rhizomes. Cleaning them prior to storage allows one to fully determine the condition of the rhizomes (thus assessing the quality of culture provided in the past season), the qty of reproduction, ensures that the rhizomes are really truly dry, as well as reducing the amount of storage space needed.

"Cleaning" them entails carefully pulling apart and sifting through the potting medium to locate the fresh new rhizomes / tubers. Note: On the segmented rhizomes of certain Gesneriads, the little rhizomes are often quite brittle and it is common to break some in the process of handling. Do not fear, each piece will typically generate new growth in the coming season.

Depending upon the culture received, as well as the quality of the growing season (some summer's are just better than others), the qty of new rhizomes/tubers produced can vary. Also, some cultivars are just better/stronger growers than others and thus tend to multiply faster. Either way, cleaning them allows one to better see what's been going on and how they've been multiplying.

Whether you clean before storing, or not, is your choice. However, if you elect to store pot-and-all, keep in mind that most growers will find that their plants perform better when given fresh potting media each season. 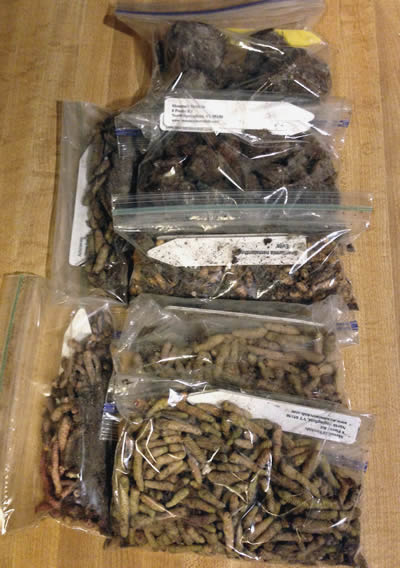 For storing things "pot and all", the entire container (now completely dry) should be bagged so as to prevent further to total desiccation. Most bulbs will shrivel in a prolonged exposure to low humidity. However, storing numerous pots of soil often presents a space issue, so....

For Tubers & Rhizomes that have been cleaned, I leave them uncovered on an open counter at least overnight. Some of the bigger Begonia tubers are hard to completely clean. This is okay too - we just leave them to air-dry for several days, or until there is no surface moisture evident.

At this point, I place the cleaned and dried tubers / rhizomes, along with a tablespoon or so of bone-dry peat moss or vermiculite (mostly for cushioning), into small zip-loc baggies. I then add a small amount of "Copper Fungicide" (or other "bulb dust" type fungicide) to each bag, seal it, and shake lightly to distribute evenly.

Be sure to label the bags! Nothing is more annoying than to take a bag out of storage in spring only to find it didnt get labeled! 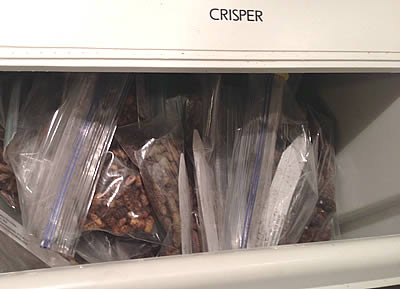 What's At Rest Should Stay At Rest

Newton may not have been thinking about plants but his first law can apply here too! Once we have them resting they should stay that way until the time is right and we're ready to act upon.

Therefore, once things are bagged, and to keep them resting and dormant, they should be kept cool. If the temps are routinely above 55F, many plants will start into growth early. To prevent this, keep them at or below 50F, but well above freezing. If you live in the north country, a very cool windowsill, basement, or other such location might suffice. However, for those without a naturally or reliably cool spot, one can resort to refrigeration. I currently use a small dorm-style refrigerator that i devote to storing resting plants. I set it to the "warmest" refrigerator setting it has (which maintains around 48-50F). In the past I have also used the vegetable "crisper" bin of a household refrigerator for storing them. It's probably cooler than needed, but I've found that even cold-sensitive genera like Achimenes do not mind a few weeks/months in such cold storage as long as they are prepped as described before going in. 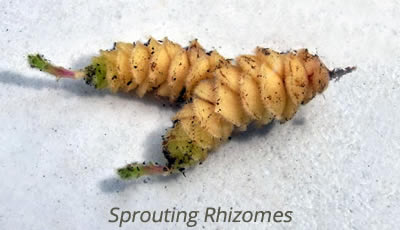 How Long Do They Rest?

My mantra is usually to keep them resting until our days get long enough so that there is sufficient warmth and light to have them sprout and grow sturdily. If they start into growth too soon (meaning they've not been kept cool enough), then a lack of sunlight and/or not enough warm weather at that time of year can lead to spindly or weak plants and possibly even result in a premature dormancy during the coming summer. If kept reliably cool enough, they will stay dormant for quite some time. However, if other means of storing them are used, then one should visually inspect them every few weeks for signs of initiated new growth.

When the weather in your area has warmed and is once again suitable for growing (for me this is April-May-June in the greenhouse), then one can re-plant them. Start them off slowly with hardly any water - which you can increase once the new sprouts appear.